Meanwhile update -- and a one-day sale

I've just released an update to Meanwhile. Is this exciting? I hope it is, because this release contains new high-definition artwork. Digitally remastered from Jason Shiga's original files! 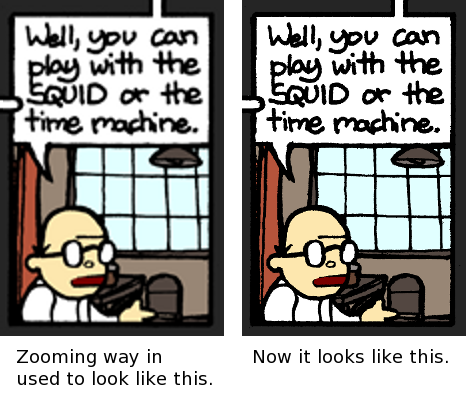 (I've always wanted to say "digitally remastered". One has fewer and fewer opportunities these days.)

On iPhone 4 (or other retina-scale displays, such as the newer iPod touch) you will see a sharper, clearer Meanwhile. You can also zoom in farther than before, a full 2x, to see this art in all its detail.

Older devices (such as iPad 1 and 2) cannot display the sharper artwork at normal zoom. But you can still zoom in to 2x to see the high-resolution art.

To celebrate this, I am offering Meanwhile for a impulse-buy-delighting $0.99 -- for today only. Jason and I think that the app is its own best advertisement -- everyone who plays with it is immediately in love with the design. So, we want more people to play with it. Pass the word around to your friends.

Slash Fiction and other puzzles 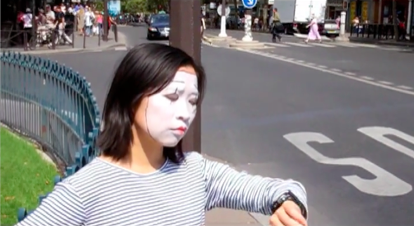 As I have done every year since 2004, I spent the second weekend in January playing (or solving, to use the field-specific lingo) in the MIT Mystery Hunt. I always feel quite privileged to play; each hunt iteration represents a one-time-only interactive artwork that a team of passionate amateurs spends the better part of a year planning and constructing, culminating in a single weekend where a thousand puzzle-hungry solvers trample through it.

Like an informational World’s Fair, it leaves its husk behind for the late-but-curious to tour: you may browse all this year’s puzzles online, and note that they seem to be arranged around a theme of ill-advised Broadway mashups. Without the context of the hunt alive around them, though, the puzzles lose a certain amount of motive force. When presented all at once like this, they lack the light but necessary hunt-specific narrative that organizes paths for the solver to follow. (This year, it featured a storyline based on the further adventures of the swindling showmen from The Producers.)

I would also argue that, even though each puzzle now links to its own solution page, these puzzles must still seem impossibly obscure to curious layfolk who stumble upon them. So in this article, rather than examine the hunt’s overall form where carefully paced groups of puzzle-sets slowly reveal the twisty superstructures of meta-puzzles, I’d like to highlight a few of the several dozen individual challenges which defined the weekend for the hunt’s players.

Let’s start with the puzzle titled Slash Fiction, designed by (and starring) Seth Schoen and Vera Yin. It makes a nice blog-post headliner because it happens to take the form of a six-minute video, one as fun to watch as to solve.

Have you watched it? All right, then: your challenge, as with every hunt puzzle, is to somehow definitively produce an English word or phrase based on this input. 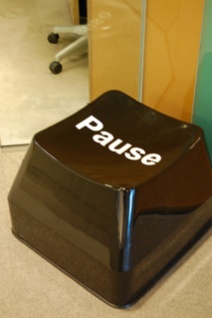 I’d like to follow up on that last post about Dark Souls, providing a little more context for my reaction. While it occurred against a backdrop of environmental stress that was probably incompatible with such an unusually demanding game, I find the real trigger to lie with a single, curiously underreported feature of this work.

No essay about Dark Souls I encountered before this week has mentioned its lack of a pause button. Pressing start on the controller summons up an equipment-swap overlay where you can futz around your character’s belongings in typical RPG fashion, but it does not stop the in-game action. The only way to make the game halt, even temporarily, involves quitting it entirely.

Thus, if the doorbell rings while your character is under assault and in danger of losing all your recent progress, you will have a certain choice to make. I found this design decision first perplexing, then fascinating. It seemed devilishly in-keeping with the game’s overall attitude of reward for those who learn to play by its rules, and utter disdain for anyone else. Oh, I’m terribly sorry, says Dark Souls to the player looking for the pause button. I thought you had come here to play. Clearly, I was mistaken. I do apologize. Why don’t you come back when you’re ready?

I just got back from a preview showing (I think the first public preview showing?) of Lorien Green's documentary Going Cardboard. It was pretty great.

The movie covers the modern era of board games, what Green calls "designer" and I call "Euro" games -- Settlers of Catan and its genre-descendants. Jason Scott did the editing, so Get Lamp fans will recognize the style: lots of interwoven interview clips, giving an overview of a community and then several takes on particular aspects of it. We get some history (and an amusing sequence of gamers being ambivalent about Monopoly); we get a view of Spiel Essen, the mightiest of board-game conventions. (Fascinating to me, as I've only been to the relatively puny Origins.)

Going Cardboard has a bit more narrative than Get Lamp, I'd say. It follows a couple of people through full-circle story arcs. We see Don Vaccarino taking Dominion from a homebrew prototype, through publication at Rio Grande Games, to winning the Spiel des Jahres in 2009. And we watch Bryan Johnson recounting his tribulations publishing a game called "Huang Di" from 2006 to 2011. (Johnson just got a version of the game funded through Kickstarter, so that story has a happy ending -- the final cut of the film will likely mention that.)

I am peripheral to the board-game universe, but I recognized plenty of names of interviewees -- Vaccarino, Alan Moon, Klaus Teuber, Friedemann Friese, and others. Reiner Knizia, of course. I know a few of the faces as well. (Nice to see Kory Heath being typically enthusiastic about game design.)

Plus, I saw myself! One of the crowd shots at Unity Games distinctly shows the back of my head. I was wearing a Werewolf t-shirt. So, you've got that to look forward to also.

When Dark Souls broke its contract 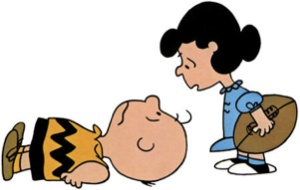 Last semester I found myself needing two copies of Xbox Left 4 Dead so that we could study that game in class. I already owned one, and feeling too lazy to requisition another from the university, I arranged a temporary trade for a friend’s copy. He requested Dark Souls in exchange, having observed my copious tweeting on that topic a few weeks before. The semester’s over now, and my friend had quickly found that Dark Souls wasn’t really his cup of tea. I’ll propose a lunch to reverse the exchange sometime, but I’m in no particular hurry: I don’t really want to see Dark Souls in my house again, let alone in my game console.

To say I don’t like the game would be an oversimplification bordering on falsehood; in fact, the game brought me many hours of enjoyment, and I carry lasting fond memories of certain gameplay moments. As reports from friends filter in that they are finally finishing the game (it takes upwards of 100 hours to traverse), I think back to these moments, and the chance that I’ll give it another look someday rises above absolute zero. But this can’t happen in the near future: my relationship with this game ended so disastrously that it’s really better for both of us to avoid contact for a long time.

I must risk sounding melodramatic to explain why this game so profoundly unsettled me: I had never felt such purely negative emotion about a videogame in my adult life as I did at the moment when Dark Souls betrayed my trust.

A new (tiny) IF work -- Key Features! This was commissioned by MakerBot Inc. in honor of their upcoming product announcement, which will be at CES on Monday.

MakerBot is a nifty 3D printer company, and that's what's neat about this game: you can literally print out the feelies as real-life objects as you play! If you have a 3D printer. (If not, you can still look at the model renderings to see what they'd look like. The links will appear as you play.)

You can play Key Features online or download the game file. (Use your browser's "download" option to do that, as the game file may come across as text.)

Notes on an introductory game-studies lab

I’m pleased to announce the release of annotated class materials from the introductory game lab I taught last fall. I built the course more or less as I went, generating a lot of notes and other written material along the way; this collection of webpages presents them all, along with several pages of additional exegesis.

It’s certainly not a step-by-step guide for teaching a game lab — indeed, it’s the results of three months of intense, on-the-fly academic design by a first-time adjunct instructor (made possible by a wide and friendly support network). It’s unavoidably raw, and would likely require significant adaptation to suit any other teacher’s purpose. But I release the collection under a Creative Commons license in the hope that it will serve some purpose to somebody, whether practical or just inspirational.

Animated Screenshots / If We Don't, Remember Me

I find it tempting to write that Leon Arnott’s Animated Screenshots is the If We Don’t, Remember Me of video games, but I’m not sure if that’s exactly true.

Somehow Gus Mantel’s IWDRM, through its slight and carefully controlled animation of film stills, creates long, silent, haunting moments that feel like an extension of the movies they’re from, without being direct excerpts. Arnott’s work, as far as I can tell, comprises literal moments from the games they quote, and as a result feel less like subtle new interpretations of an existing work and more like — well, animated screenshots, really.

Time in a videogame moves naturally in loops. Sit your character still, and the world does in fact stop moving, the clouds drifting past while the candles flicker their four-frame animations in their sconces — forever, or at least for as long as you care to wait. Play a boss fight passively, and watch as the screen-filling terror reveals itself as a predictable, on-rails process, ultimately powerless.

The two sites do share similarity in their surprising use of the animated GIF as a vehicle for quietly contemplating, and even discovering, works in other media. (Does the animation above make you as curious to play The Extinct Bird as it does me?) Definitely worth a browse, in both cases.