I let this update slip late, because I hoped I would have a Secret Project to announce. But legal paperwork takes however long some other lawyers think... Hang on. Wait. That's what I wrote six weeks ago. It's still true. Dammit.

But that is not Hadean Lands news. I'm afraid that work on this secret thing -- and, subsequently, stress in waiting for legal work on this secret thing -- has contributed to June being "not IF month" for me. I have gotten some work done on a different secret project, purely out of compulsive fiddling. (If you've been following my Twitter messages, you have a hint of where that started. But not where it's going.)

So the plan is that July will put IF back at the top of my priority list. Of course the secret project will (I hope) uncork during July, so then I'll be juggling two things at the top of my list. But that's normal for me. I've been doing that every month since January, it's just that which items are on top keep shifting. I have milestones for July, but I hate announcing milestones, so you'll have to wait until the next update to see how I'm doing on them (or not). Sorry.

I did finally get the new computer I promised myself in December. So that's progress, although only indirectly.

In other catch-up news: Balticon was great but I only wound up doing one IF event. So it was. I am not going to be at Readercon this year (I gave an IF talk there last year, which was nice, but doesn't need to be annual). I expect to drop in on Mysterium, which is a tiny Myst fan convention in town, but that's just for fun. And not until August anyhow.

Blogging has been slow, because I've been writing code and Jmac is off at Origins. Surely he will have tales to tell when he returns, but in the meantime, I will talk about games.

Not in any incisively analytical way, mind you. It's just that I snarfed four PS3 games this gaming season, and in the past month I booted them all up.

Or: things that have happened to me since Sony relaunched PSN and their "Welcome back" promotion.

Continue reading Reasons why Nintendo could ship a bag of moldy jujubes for their console and still destroy Sony.
Permalink | Comments (0) | Tweet this | Share this on Facebook

Somewhere in the heavens, they are googling 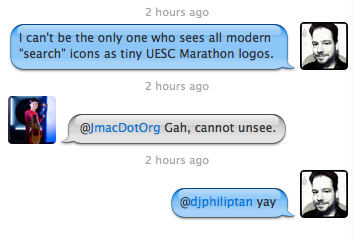