Let's use rot13 for game spoilers 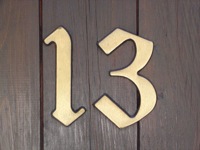 This post contains minor spoilers for Fez, but only if you deliberately decipher them.

I have asked spoiler-class questions about games, films, or books in this format before, usually to little response. In retrospect, it’s clear that I assumed too much in expecting any friend or follower to see it as anything other than gobbledygook. In yesterday’s tweet, I tried an extra step with appending that URL, and to my delight received several nice replies on Twitter and Facebook — as well as a handful of retweets, which I read as compliments on my chosen encryption method.

Some of my correspondents on Twitter chose to adopt the same encoding. “Anu,” advised one reply. “Pbairefvba vf cerggl enaqbz.”

After only a couple extra weeks of work (and non-work -- oh, PAX, you great distraction) I am declaring my iOS IF interpreter ready for beta-testing. 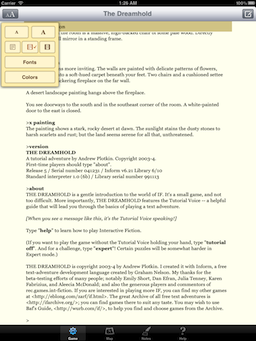 Again, this is not Hadean Lands. The first game I will distribute this way will be The Dreamhold, a tutorial IF game. It will be a free download. (Really, The Dreamhold is already a free download -- you can play it on my web site or in iPhone Frotz. I will be packaging it as a standalone IF app with my new interpreter code.)

As I said, I'm doing this for buzz, and to get feedback on the UI design. But as a bonus, this release of The Dreamhold will contain a brand-new dynamic map. I figure that mobile IF players don't want to draw their own maps. (I mapped all the IF I played when I was a kid... stacks of scrap paper all over the computer room. When you're standing on the subway in rush hour, it's not so simple.) So the game will track your progress, and fill in a map for you as you play.

I hope testing won't run too long, and The Dreamhold will be out by the end of April. (I know, last update I said "early April". Turns out that was wrong.)

Announcing Play of the Light

I am pleased and proud to announce the first episode of Play of the Light, a new audio podcast presenting a conversation about videogames between myself and Matthew Weise (former design director of MIT’s GAMBIT Game Lab, now narrative designer for Harmonix).

My inspiration to give the pure-audio production medium a spin comes from the work of Dan Benjamin and company at 5by5, a podcast network that exploded into prominence rather recently and which hosts many of my favorite shows, including Back to Work and The Ihnatko Almanac. Over the last year I have observed and absorbed the values and techniques these shows employ to create highly listenable radio. While I didn’t quite realize it until I had finished cutting the first episode, I want Play of the Light to answer the question “If 5by5 hosted a videogame show, what would it sound like?”

The real answer to that question must remain a platonic model in my head, and I can only splice together my best imitation of it, especially since audio-only recording and editing is new turf for me. But I think I did all right — my video work experience proved at least partially transferrable — and I’ll only get better at it.

I also had a sort of counter-inspiration coming from nearly every other videogame-themed podcast I’ve heard. While I have sampled only a tiny slice of the full field — this is a very well-covered topic in podcast-land — I found most such shows difficult to enjoy. They tend to feature friends talking about new games they like or don’t like (as well as whatever else may spring to mind) until they feel done, and then they publish the result with little to no editing. Listening to the result, for me, feels like awkwardly trying to mingle with a group of strangers who all know each other and have their own language, and this overshadows the ostensible topic.

I wanted to create a show that demonstrated at least a little more care than that, from the topics chosen before recording to the style of editing performed afterwards. As I write in the new show’s About page, I really do consider videogames to play an increasingly central role in human culture, and desire to bring the topic more thoughtful and digestible discussion than the internet-audio medium typically delivers.

We have committed to creating an initial “season” of six biweekly episodes, starting this week. Many will be discussions of individual games or game series, but I hope to get into some wider cultural examination as well. I do hope you’ll listen along as it happens!