And when I say "released", I mean "I uploaded it to the Info-Mac FTP archive at SUMEX-AIM." I set up a web page for the game, but I didn't publicize the URL much, because what was a URL? Everyone used FTP.

(I think Info-Mac had a web server too, by that point. But HTTP was merely an alternate way to access the files. It wasn't a web site.)

For fun, here's the announcement I posted to Usenet. (Thanks to Google Groups for preserving it; no thanks for making it really hard to find.)

I haven't pasted in the whole thing, but check it out for historic amusement. Bang paths! Compatible with System 6.0.7 and System 7!

Trawling through the Usenet group for the era has been a blast. What were people talking about? Wolf3D. The Seventh Guest. Marathon. Myst, lots and lots of Myst. Doom (it will be ported to the Mac by Christmas! ...but only PPC Macs, not 68k.) And hey, there's a question about Zork (the mainframe Dungeon version, there, although there are also Return to Zork comments).

And some lesser-remembered classics, or "classics". FA-18 Hornet. An RPG called Prince of Destruction (which I seem to have written a detailed review of, and then forgot the existence of). An overhyped Lode Runner remake. Oxyd.

I see that nobody commented on System's Twilight for several weeks. That must have been frustrating. But some hint requests turned up in early November.

I spent a year writing System's Twilight. Was it worth it? It paid for my second Macintosh, I believe. (The PowerMac 9500! No, I neer bought Doom.) It was great resume fodder for my brief stint as a Mac programmer at Magnet Interactive. (Then Magnet tried to turn me into a Win95 programmer. Whoo-ee, did that ever not work. Ah, licensed "Highlander" video game, how poorly you worked out for Magnet.)

And then, just last week, I get this email:

The elided address was that of the shareware company that handled fulfilment from 1997 to 2000. So, no, it's not still valid -- please play my game for free! But I didn't ask where the querent had found version 1.0.5. Maybe one of those shareware-shovelware companies that used to orbit the Mac universe, Nemesis-like, raining down comets of questionable CD-ROMs.

And now, the porting question. Every couple of years, somebody asks me if I've ever considered porting System's Twilight to Windows, or OSX, or Flash, or Java, or iPhone, or wherever the hot locus of gamerdom is. (Okay, Java was never hot.)

Answer: sure I've considered it. I haven't done it because it would be, probably, another year of work. The art is sized for a 320x512 pixel display; the code is built on the old Mac toolbox. Even the puzzle data files are formatted in Rez source code, for the Mac resource manager. So, basically, starting over. I've always had other projects that seemed more rewarding than re-releasing an old game.

(Plus, I've never been sure what would stay the hot locus of gamerdom. Mac has swapped architectures twice since 1994, and emulators are legally hairy. Java is aggressively portable, but ugly; Javascript is aggressively ported, but slippery as an eel. Flash? Ask me again in ten years. The iPhone? Ask me again in three. Maybe I'm spoiled by the IF world, where games stay playable for twenty or thirty years in a row.)

It's harder when somebody asks if they can port the game. For free, honest... but there's no such thing. I'd want the interface to be done right, which isn't necessarily the way I did it the first time. I'd want to test all the puzzle mechanics. I'd want, in short, to stick my finger in the soup all the time. Likely to be infuriating to the hapless volunteer -- and it would wind up eating months of my time anyway.

So, for now, no ports. Don't come asking. The future may hold options. We'll see.

(In the meantime, the legally hairy emulators do let you play the game.)

I leave you with this lovely map: 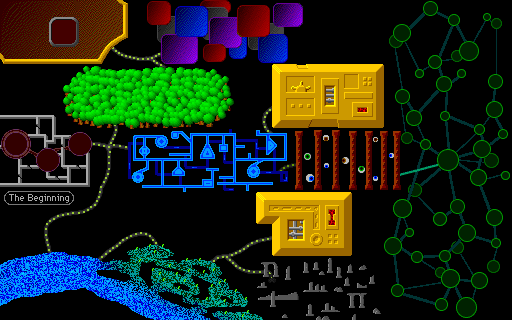 This entry was posted in Zarf on Games  and tagged  egoboo, history, mac, puzzle, System's Twilight, zarf. Bookmark the permalink.