Tufts (that's in Boston) is doing a whole series of IF-related events, organized by Tufts ACM, with the help of the People's Republic.

Here's the schedule, as it stands right now. (Note: please use the tinyurl version of these links, as the URL may change.)

Nick Montfort on IF

Clara Fernández-Vara on Storytelling in Games

Creating Interactive Fiction with Inform 7, by Aaron Reed. Cool-looking book, eh? It's been out for a few weeks, and I haven't seen a review beyond short "this book is awesome!" posts. I finished reading it last week. I ought to write a review.

Our September meetup will be on Monday, September 27, at the usual time (6:30, with migration to CBC for food/drink around 8 or so) and at the usual place (the Trope Tank, aka 14N-233 on the MIT campus). We don’t have any kind of official agenda as of yet, but here are some things we might discuss: 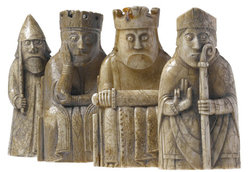 Via the New York Times’ “Gambit” chess blog, we learn of a new controversy surrounding… well, not so much a very old game as a set of very old game pieces, with new evidence causing some to question the national origin of the celebrated Lewis Chessmen.

But really, I just wanted to take the opportunity to mention these extraordinary game pieces on this blog. Even though they’ve been known to the modern world since the 19th century, I first learned about them only some months ago while kicking around Wikipedia. While they like look like the whimsical work of a modern sculptor — at least to my unschooled eye — they were actually carved some 800 years ago.

I showed pictures of these little guys to a friend this morning, one who actually does know something about art history. She tried to add a little perspective to my astonishment, noting how a lot of medieval artwork looks comically cartoony by modern standards. But while she spoke, all I could think was: boy, I’d love to just reach over and pick one of these pieces up. I recognize intention in their squat, chunky shapes: they were made to thunk down on the board, decisively. I bet they make a really satisfying sound when that happens.

Heading away from the past and into an uncertain future, we discover quantum chess, a computer game by Queen’s University student Alice Wismath, based on a concept by Selim Akl, a computer science proessor at Queen’s. It appears to be an academic work in progress, though one fun enough to have gained a bit of media traction. Certainly, it’s an intriguing idea, using the notion of quantum superposition to add a (perhaps rather thick) layer of tactical surprise to an otherwise pure strategy game:

A piece that should be a knight could simultaneously also be a queen, a pawn or something else. The player doesn’t know what the second state might be or which of the two states the piece will choose when it is moved.

“It was very weird,” said Ernesto Posse, a Queen’s postdoctoral researcher who took part in a recent “quantum chess” tournament at the university in Kingston, Ont. “You only know what a piece really is once you touch the piece. Basically, planning ahead is impossible.”

Like a lot of geeks, I’m enamored with the twisty little passages that represent quantum physics (or at least the closest representation a layman like me can grasp). But even moreso, any science that can plug itself into a cultural foundation of gaming to produce wacky chess variants is my kind of science.

The last PR-IF playing event was very successful, so we’re trying it again, this time with a more modern piece of interactive fiction: Lost Pig. Come join us this Sunday, September 12, from 2-5 pm at MIT in Building 1, Room 135. For more information, including live stream information, check out the PR-IF website.