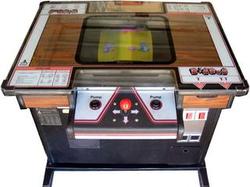 Though I myself have yet to buy into tablet technology, I have had the pleasure playing Days of Wonder’s Small World on Zarf’s iPad a couple of times. I can objectively tell you that I like it a lot, based on the fact that he’s clobbered me at it both times and I still want to play it again. Since then, I’ve watched my Twitter circle get really excited about The Coding Monkeys’ excellent iPhone adaptation of Carcassone — due for an iPad update this summer — and I’ve also been turned onto Luigi Castiglione’s loving iPhone/iPad implementation of the Italian folk game Scopa, worth seeing just for the beautiful Neapolitan card deck it uses. I see more than mere coincidence in my discovering all these at once.

The iPhone is no stranger to board and card game adaptations, but something new seems to be afoot, driven by the little phone’s newer, corpulent cousin. Even with relatively few datapoints, I feel confident that tablet computing (and do note my careful non-namebrand specificity here) is destined to significantly boost public exposure to good, modern board games. Tablet-based games aren’t simply a digital adaptation of tabletop games; they are tabletop games, though of an entirely new sort.

Playing Small World on the iPad, I sit across the table from my opponent, facing them, and we take turns sliding our armies around the colorful little map with our hands. Between turns, we analyze the situation together, talking face to face and gesturing naturally at the table before us. And so, it’s like any strategy board game I’ve ever played. But it’s also digital: tapping certain labels on the “board” changes the view entirely, unfolding a display of your requested game-relevant information, and that seems entirely natural too, if along a different angle. And there are the more subtle effects stemming from the presence of a software-based referee: it resolves all in-game conflicts for us, and quietly prevents either of us from doing anything illegal, without anyone feeling the need to double-check the rules.

Thinking about what defines a particular game medium, one doesn’t always consider elements like the player’s physical posture, and where they sit relative to their fellow players. But the experience of playing a digital game with a friend on the iPad proves quite different than that of sitting side-by-side on a couch with Xbox controllers in hand, or sitting alone with a mic strapped to your head. Your sense of posture and presence is part of the game’s medium, as much as the material of the game’s manufacture. Playing Small World gave me a frisson of novel confusion, marrying the player-interactivity of a board game with the board-interactivity of a computer game. I felt the seam that joined them, but it felt right. This was something new, comfortable, and fun.

On reflection, I realize this isn’t the very first time I’ve encountered this peculiar recombination, though I must cast my memory back decades to make the connection. During the height of video games’ golden age in the early 1980s, so-called “cocktail” game cabinets were a common sight. These machines eschewed game machines’ familiar stand-up shape, instead taking the form of small, square tables, around the size and shape you might encounter at a bar or coffee house; just large enough to seat two people — and their drinks — comfortably. Two identical sets of game controls sat tucked under either end of the screen, which itself was embedded under the thick plexiglass of the table’s surface.

Cocktail games were an attempt to take the familiar, cozy setting of two friends or family sitting at a table to both play a game and enjoy a lovely beverage together, and applied it to the then-new entertainment of video games. And, for a brief time, they succeeded. Back when coin-operated games were marketed as social amusements as much as they were attractions for children or game-hobbyists, cocktail games could be found in many spaces outside of arcades or game rooms. As a child traveling with my parents on their many business trips, I would frequently encounter cocktail versions of my favorite video games in hotel lounges. While I delighted in discovering them, I was far too young to really appreciate them as they were intended — in fact, I remember the frustration I felt at seeing two grown-ups sitting at the Pac-Man table and just talking and not even playing it.

Alas, cocktail games did not survive coin-ops’ decline in the latter 1980s, long before my own adulthood. But sliding my little orcish army-tokens around on Zarf’s iPad, I think that I start to see what I missed. Whether or not the new games’ deveolopers consciously realize it, the very form of tablet gaming tips its hat to the cocktail games of yore, and then strides confidently where the old games wanted to be, 30 years ago.

This is going to be great.