Did you know that laser tag still exists as a commercially viable concept? When the gf stated that she wanted to celebrate her birthday this year by playing laser tag, I reacted quizzically. My concept of laser tag does not stretch beyond memories of the Worlds of Wonder-branded toy that flared into a bright but brief fad in the 1980s. I recall the spread it had in the Sharper Image catalog, and its cheesy Saturday-morning cartoon. My friend Jaimy and his little brothers got some sets for Christmas one year, back then, and we played at running around zapping each other in his driveway at least once. But that was all long ago, and I'd assumed it had long since gone the way of all gimmicky plastic. 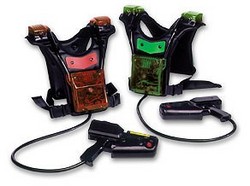 But according to Wikipedia, the concept of laser tag - that is, mounting an infrared flashlight into a gun-shaped casing and firing it at wearable, IR-sensing targets - originated with the US military in the late 1970s, and started appearing in a variety of toys at around the same time. While home versions no longer have an aisle to themselves in toy stores, there continue to operate across the US laser tag "arenas" operating under a variety of names and trademarks. The closest one to us happened to be Laser Quest in Danvers [noisy Flash link, sorry], so we grabbed a dozen or so friends and tripped out to the suburbs.

We played two 20-minute games, both of which had rules I can best summarize as those of a first-person shooter deathmatch - every man for himself, basically. As with an FPS, the penalty for "dying" - getting beamed in any of the sensors attached to your vest or gun - was to leave play for a few seconds, during which you can't fire (or be meaningfully fired upon). You gained 10 points for zapping someone, and lost some points for getting zapped, varying by the sensor's location and who shot you. And the end, everyone receives a scorecard detailing whom they tagged and were tagged by, on which sensors, and for how many points.

The arena was impressive, despite (and perhaps somewhat assisted by) a certain low-budget-ingeniuty charm. It was essentially a large wooden labyrinth, its walls painted with goofy fun-house designs in colors that reacted well to the black light employed throughout. While it wasn't truly multilevel - there were no bridges to walk under - it did employ a lot of variance of elevation, accessed through a series of ramps. This gave a sense of high ground you could take, which actually did give you a better view of the whole maze (and all the potential targets within).

The biggest surprise for me was the use of real lasers in the guns. While the actual "munition" was the usual IR beams and sensors, the guns also shone red lasers forward when their triggers were pulled. What made this actually impressive was that the labyrinth was filled with mist before each match, not thick enough to obscure vision (especially in the dim light) but enough to make the lasers fully visible. I was truly taken aback the first time I pulled my trigger and saw a coherent beam flash out!

In this mode of play, the Laser Quest organizers seem to prefer piling as many players as they can at once into the maze. So our first game pitted our group against a horde of 10-year-old boys who happened to also be visiting that day. We then took a breather while the boys were allowed to play by themselves (while a theory circulated among our group that the boys' parents were tweaked to see them being pursued aggressively by some 15 adult men and women of questionable maturity). I scored 12th out of 28 players; not bad! First place went to one of the little ones, while one of our party took second.

Our second game was just ourselves, along with three teenagers who came alone. I am embarrassed to admit that, during this second round, I forgot the rules that explicitly prohibited sitting, lying down, or taking any other non-vertical pose. Wigging out a little from the relentless fog of war, I commenced crouching and tumbling around all bad-ass like you see in movies. Don't do this, perhaps especially if you're of a certain age or older. While it was fun for a while and I felt all hardcore, after a few minutes I spontaneously overheated (the place is not the most well-ventilated or air-conditioned in town) and had to sit down because I couldn't move anymore. The gf found me in this state and valiantly defended my prone position for a while. After I told her I was OK, she kissed my forehead, shot me in the chest and ran off to seek more challenging targets. It was truly a touching scene.

Anyway, despite this momentary lapse (where I quite deservedly came in last place) I had a delightful time, and look forward to playing again sometime. The scorecards imply the existence of other rulesets, including team-based and even capture-the-flag-style play. Some in our group, intrigued by this, are already talking about the 60-person all-night special the facility offers. I shall have to remember to take it easy, that time.