Meanwhile for iOS is available

Posted on November 8, 2011 by Andrew Plotkin

In other news -- or rather, the news I started with: Meanwhile has been sent off to App Store review. If nothing goes wrong, it will be available Tuesday, November 8th...

Nothing went wrong, and so Meanwhile is available, right now, in your local iOS App Store. 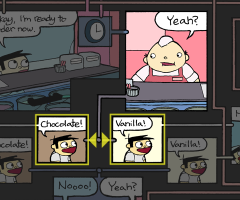 Full press release is below the cut.

And Hadean Lands? It's on my "make progress every day" list now. I should have the puzzle structure completely outlined by the end of this week. That's a small step, but comforting to me.

Zarfhome Software is pleased to announce the release of "Meanwhile for iOS". Jason Shiga's acclaimed interactive comic is now a truly interactive app for iPad, iPhone, and iPod touch.

On the way home from the ice cream store, little Jimmy discovers a mad scientist's wonderland: an experimental mind-reading helmet, a time machine, and a doomsday device that can annihilate the human race. Which one would you like to test out first?

Jason Shiga's graphic novel redefined the "choose your own adventure" format by combining artwork, story, and pathways into a looping, branching narrative structure -- a story in which your choices are surrounded by the cloud of possibilities you didn't choose. Now he has redesigned "Meanwhile" for the infinite canvas that iOS provides. The entire story is woven together on a single, enormous page. You can follow the pathways, or zoom out to view the entire structure at will.

"Meanwhile" is set in a mad scientist's laboratory, but it is grounded in probability and the Many-Worlds theory of quantum mechanics. To decipher the full story, a reader will need a grasp of logic and an eye to the playful possibilities of changing history. (Or, indeed, an ear! "Meanwhile" is fully playable through VoiceOver, making it one of the few graphic novels accessible to the visually impaired.)

3 Responses to Meanwhile for iOS is available