The best achievements are the least obvious 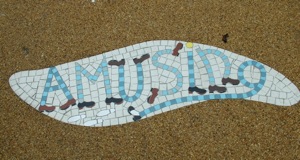 One of my favorite aspects of Portal 2 is its effective use of achievements, those meta-gamey pleasure-center tinglers now ubiquitous across modern videogames via services like Xbox Live and Steam. While the game carries the usual payload of milestone-badges, unavoidably “unlocked” just by traversing its two play modes, it splits the remainder between encouraging various player interactions in co-op mode and inviting a replay of single-player mode in a new context. This latter class of achievements proves most interesting to me, and brings to mind a certain beloved feature of classic text adventure games.

Some of Portal 2’s achievements offer straightforward challenges: one, for example, asks the player to solve a particular puzzle-chamber in fewer than 70 seconds. I find these the least engaging of the lot (and not just because I’ve so far failed to get my time under 100 seconds, ahem). Better are those that name a location in the game, but only hint at what one should do there. One of these instructs the player to “break the rules” in a certain chamber, and it’s up to them to figure out what this means, once they get there. For me, even though I’d seen and heard everything on this level already, the achievement-nudged realization of what I could do proved a fresh delight.

The most obscure of these achievements invert this pattern, suggesting what to do but not where, such as “Portrait of a Lady: Find a hidden portrait.” Even more enigmatic is the “Pit Boss” achievement, which bides you to simply “Show that pit who’s boss,” drawing the player to retrace their steps through the game to seek pits inviting extra interaction (and there is indeed one). My very favorite such achievement had me solve an optional layer of puzzles lurking in one section of the game, one that hid in plain sight during my first playthrough. I may have applauded my television when I realized.

I identify these coy achievements as the modern manifestation of the “AMUSING” postscript that would appear upon the completion of an Infocom text adventure game appears in certain 1990s text adventures, as well as some reprints of Infocom works (thanks to Zarf for the correction in the comments to this post). The game would invite the victorious player to type AMUSING to see a list of things of they might not have explored during their journey through the work — anything from one-off actions that generate sarcastic responses to entire, optional subsections of the game. More to the point, these were things that the game’s author felt they put a lot of clever work into, and hoped that player might go back to see if they missed them the first time ‘round. (One does still find AMUSING lists in some modern IF — the Inform 7 manual devotes a section to it — but their presence as end-of-game reward doesn’t have the ubiquitous status it once did.)

Granted, the comparison becomes more apt due to my own approach to achievements, especially in adventure games like Portal 2. Highly spoiler-averse, I refuse to even look at a new game’s achievement list if I anticipate a great story. Only after I survive through the ending credit roll will I allow myself to peek and see what I’ve missed. Lately, I begin to suspect that, beyond my overt desire to avoid plot giveaways, I’ve subconsciously wanted to treat a game’s achievements screen like an old-school AMUSING list — even before I become wholly aware of the similarity.

In a lesser game, I’d dismiss such vaguely worded challenges as twee, and their pursuit as not worth my time. And even for Portal 2, it took me a few months after my initial single-player traversal to work up the desire to return and mop up those achievements. When I finally did, last week, it felt like a directed homecoming, and I loved every moment I spent breathing that good clean test-chamber air once more, recycled though it may have been.

I’m not normally one to either reread books or replay solitaire videogames, but make exceptions for the the exceptional. And I’m pleased to see commercial adventure game designers find ways to turn some good out of obligatory achievement systems, much maligned and so easy to treat trivially. If they appear to take lessons from some of my favorite works of the distant past to do so, so much the better.

This entry was posted in Essays, Jmac on Games  and tagged  adventure games, infocom, interactive fiction, portal. Bookmark the permalink.

3 Responses to The best achievements are the least obvious