Posted on November 1, 2010 by Andrew Plotkin 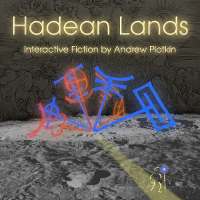 Two weeks ago I put up a teaser image, which drew a lot of nice comments and anticipation within the IF community. (Thank you!) But one image in one blog post does not a lifestyle make, and today the real fun begins.

Here's the scoop: at the end of this year, I plan to quit my job and start working on interactive fiction full time. Yes, really. The space madness has struck and it's time to do this thing. I can't do this in my spare time any more; I have too much work to finish in the IF world, and it eats at me every time I leave for my day job.

Go to the Kickstarter page to watch the awesome introductory video! (A Gameshelf production, of course.) You can also play the teaser scene of Hadean Lands on my web site.

IF is bigger this year -- probably the biggest it's been since Infocom fell apart. (You all caught that scene on Big Bang Theory, right?) I don't mean that it's challenging Portal for the hearts and thumbs of the gaming world; but people are interested and people are playing. So I think that IF on the iPhone (iPad, iPod Touch) will sell. And I'm willing to touch the mirror and try it.

You'll note I just linked to Kickstarter. Here's the cone under the scoop: I am asking for donations to get this IF project off the ground. Hadean Lands will be a full-length game -- think Dreamhold size -- so it will take some time to write.

So, starting in January, I will be splitting my time between Hadean Lands and open-source IF infrastructure projects. (And other iPhone projects to be named later.) One major open-source project, of course, will be a Glulx interpreter for iPhone. That way, anybody (who's signed up as an iPhone developer) can put a Glulx game in the App Store -- complete with artwork, help screens, embedded feelies, Gamecenter integration for achievements... All the trimmings. (If at all possible I'll make this usable with Z-code as well. Yes, iPhone Frotz already exists, but that's not a path for single-game publication.)

Want to support this plan? Give me buckets of money.

Don't have an Apple mobile device? Naturally, you'll want to support my Glulx work regardless. And I would like to do Android (Kindle, anything, etc) versions of this game somday -- those ports just aren't part of the initial schedule.

But I have a special offer: only as a Kickstarter reward, you can pre-order the Special Limited Edition of Hadean Lands, which comes on CD. That will be playable on any Glulx interpreter (Mac, Windows, Linux, or any web browser). This will only be available by donating on Kickstarter during the month of November! So eat up.

And, as they say, thank you for your support.