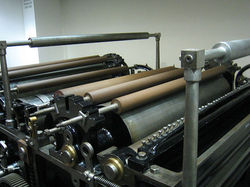 Here is one of my two funny PAX East 2010 stories: Near the start of the Friday-afternoon festivities, around the time that Zarf took the pensive-looking photo of me seen in his own PAX post, I bumped into Darius Kazemi, celebrated one-man social nexus of the Boston game-making community. We caught each other up on our respective projects, and after hearing about how I've been experimenting with writing longer, more-or-less regularly paced columns for The Gameshelf, he gave me a quest. I was to seek out a brand-new and ambitious print magazine called Kill Screen, the editors of which I could find in attendance that weekend.

The rest of Friday was then completely consumed by IF events, as others have already ably recorded. (Again, see Zarf's post for links aplenty.) When Saturday came, and after I'd succeeded in meeting my visiting Xbox Live pals for lunch, I pulled out my phone for some google-sleuthing, hoping to find where within the overcrowded PAX these magazine folks hid. A search for "kill screen" "pax east" brought me easily to this blog post by the magazine's managing editor, Chris Dahlen, where he noted that he'd be speaking on a panel in the IF hospitality suite at 7 PM. As it happened, I would be speaking on the same panel. Quest complete.

I am in possession of both video and commentary regarding that panel, but alas, my poor, broken, coffee-stained MacBook lacks the wherewithal to make the video postworthy. I expect FedEx to deliver its shiny white replacement presently, at which point I'll attempt to push my own thoughts on that panel and the whole "IF Outreach" topic into presentable shape.

Until then, allow me to review my PAX East 2010 Haul. With one exception[1], everything I purchased took the form of printed matter, and all of it came from either the Attract Mode folks or Jason Scott, both of whom had set up tables in "Band Land" amid all the musicians' merch. I took delighted surprise in finding myself coming home from a video game expo with only an armload of books and magazines, and hope you'll enjoy hearing about it.

In the interest of brevity (ha ha), I'll split this review across two posts, covering the magazines now and the books and other stuff later.

Square-bound, thick-leaved, and an all-around beautiful thing to see, hold, and flip though, Kill Screen succeeds for me because it brings to mind the forgotten video game magazines of my childhood that affected me so profoundly. More than a mere collection of articles, the editors of this work clearly know a good magazine works, the way that its mood changes as you advance through the pages, ordering the articles and other pieces to make its flow most varied, interesting to the person exploring it. The magazine's art style is outstanding and arresting, with emphasis on photography and spot art that complements the text, rather than literally illustrating it; there is surprisingly sparing use of game screenshots.

The stories within this premiere issue (labeled "Issue 0" on the spine) approach video games in a variety of ways, not a single one of which is that of a game review. There are, for example, personal stories: A Gen-Xer recounts his mental state while playing Resident Evil for the first time on a then-new original PlayStation, placing it against the backdrop of a lifetime of video gaming that began with the Atari VCS. Another writer describes the role that video games played -- and continue to play -- in his relationship with his younger brother.

Perhaps my favorite article is a feature story found dead center in the issue, on the unreleased game Air Traffic Manager, an ATC simulation that a lone developer has been toiling over for nearly a decade. The article's author artfully mixes in exposition on the state of AI programming in video games, based on interviews with other, more well known game developers and game-studies academics. In the end, he synthesizes this broad view with the specific challenges that the developer faces with his own game.

In the big picture, this article isn't that extraordinary; it's simply a piece of good, solid journalism, up to par with what appears in better newspapers every Sunday. But I couldn't tell you when I last read an article of this quality about digital games before, at least not one that was aimed to so wide an audience that it diluted itself while explaining its own vocabulary. I want to read more like it, please.

The whole magazine's package is broken up by humor pieces and cartoons, both nicely understated in their presentation. It wraps up with a funny and contemplative work of fiction masquerading as a walkthrough of an obscure game: a light-hearted sign-off appropriate after much deep thought on the topic of games, and again exactly the sort of thing I remember reading in the game magazines of yore.

The unavoidable downside is that Kill Screen is rather pricey. Twenty bucks for a single issue, or $75 for four, puts it out of reach of the casual reader -- including most kids, which therefore makes its story diverge from my narrative of buying the latest Electronic Games at the newsstand during my formative years. But I understand why it's priced the way it is; launching a print magazine in 2010 is a little crazy. (Managing Editor Chris Dahlen, in fact, participated in panel titled "The Death of Print" hours before I met him.)

But, you know what? If a team of creative people who care about improving games journalism must so thoroughly emulate the format and sensibilities of pre-21st-century magazines that they end up actually and literally printing a magazine on paper, then so be it. There is value just in making something like this happen, even if the circulation must remain relatively low, at least at first. It's still bringing work into the world that wouldn't have been there otherwise, and it a format that's at least a little less ephemeral than what's usual, these days. I plan on springing for a four-issue subscription, and hope that Kill Screen will persevere to fulfill it and then some.

The other stuff I bought took the form of more traditional zines: Black-and-white, hand-collated works that sell for a few dollars each. And here they are:

Boy, did I like this. According to its preface, this zine represents the outcome of a challenge that the author gave himself: write something interesting about all the digital games that he happened to play over a five-week period. The outcome is a collection not of game reviews, or even of essays per se, but of a patchwork where each story adopts a form inspired by the game at hand.

So, Shadow Complex gets an overblown screenplay treatment, featuring dialog by two bemused gamers on the game's nonsensical plotting while evil cackling overlords listen in. Metal Gear Acid gets adapted into rules for a solitaire board game, including a sheet of playing pieces for cutting out and mounting onto cardboard, if the reader is so inclined.

Super Metroid receives representation in the zine as well, by way of a two-page treatise, mostly in illustration, on how the game's original SNES controller mapping could have been better. I infer from this that Kumar has a storied and comfortable history with this elder title, about which he's already said a lot; either way, this was a clever way to say something new about it.

These and several other short pieces all come together into a nice little meal of intelligent and clever game critique, bound together by the background narrative of one person experiencing and reacting to all these games in a short span of time. Love love love exp., and really hope to see more.

This one, I must admit, doesn't really play to my own tastes. A fanzine in the classic sense, it bursts with enthusiasm, less interested in critique than in showing you all this really cool stuff. But there are so few literal fanzines any more. An enthusiast who puts the effort into organizing, editing, and laying out their thoughts the way that Hawkins does automatically stands out as something remarkable against a background of noisy keyboard-bashing webchimps.

And for all my snooty snuffling: well, there actually is some really cool stuff in here. The first of the two extant issues, for example, contains a long interview with Rodney Greenblat as its centerpiece. In the second issue, Hawkins spends half the zine's pages touring us through his favorite neighborhoods in Manhattan, telling how video game culture differently infuses each of them. The latter lengthy piece could benefit from some tightening up, but it still tells me stories I hadn't heard before.

According to the Attract Mode website, a third issue of FORT90ZINE will be with us soon. The thing about enthusiasm-driven projects is that where there's some, there's more. And I am happy to see this particular project continue.

Update: Part 2 of this writeup is now online.

[1] I also impulse-bought a set of Attract Mode's Calamity Annie buttons, since they were right there.