Ian Schreiber has started his free online game design course. The first post discussed what a game is, then he asked people to actually make a game (using Brenda Brathwaite's "The Easiest Game Design Exercise Ever (Really)"). When I read Brenda's post, I didn't end up making a game, but signing up for this class made me actually make a game. It took about 15 minutes (which included doing a little Wikipedia research). It's not a good game, but it's a game. The point of the exercise is simply to get people over the hump of actually making their first game. The homework (or "homeplay" as Ian calls it) is to read the first chapter of his and Brenda's book, read Greg Costikyan's I Have No Words & I Must Design, and play the series Understanding Games, which was all interesting reading/playing.

And now I will share my little game with you. We were just supposed to draw a path and make a simple race-to-the-end game. I decided on a jagged path, which made me decide to do a game about lightning. I did a bit of Wikipedia research, but I mostly didn't use it (although I might in a future game). Here is a poor picture of the game, which I drew with pencil in a notebook: 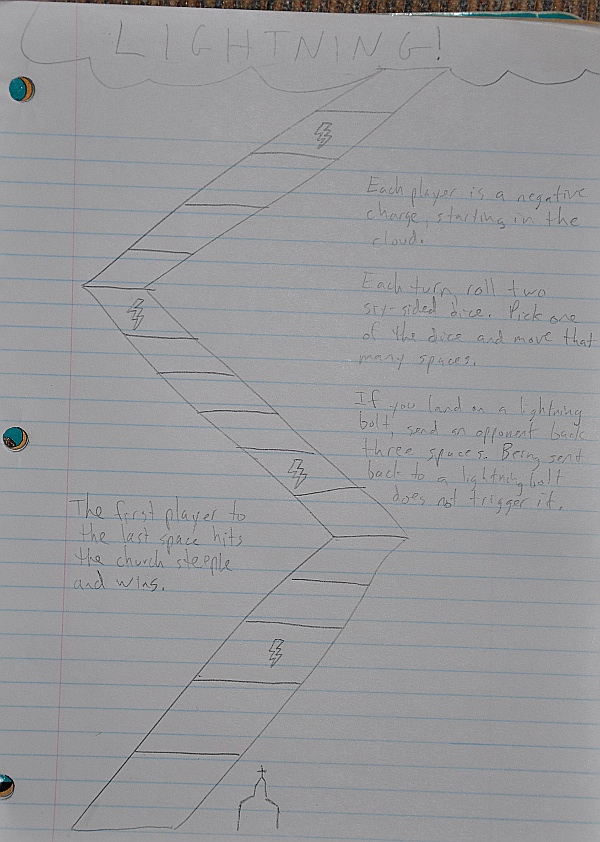 Here's the text, which is probably too hard to read at this size:

Each player is a negative charge, starting in the cloud.

Each turn, roll two six-sided dice. Pick one of the dice and move that many spaces.

The first player to the last space hits the church steeple and wins.The two-player version is very heavily slanted towards the first player, but the four-player version seems to be a little more balanced. Like I said above, it's not a good game, but it's a game. I'm definitely looking forward to keeping up with this class.

This entry was posted in Uncategorized and tagged  game design, games. Bookmark the permalink.