Driving adver-games, now and then 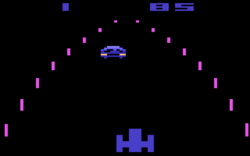 Recently playing the really crappy, Toyota-branded freeware video game didn't make me go buy a Yaris, but when I saw that one was available in my local Zipcar fleet when I needed to go grocery shopping the other day, I immediately gravitated to it. Make of that what you will.

(Real-life Yaris Review: While I couldn't find the button that makes the gun pop out of the hood, I did find the controls much nicer than those in the XBox version, and suffered no frustrating camera issues.)

This got me thinking of the history of melding digital games with car advertisements. Since one of the oldest video game genres is driving games, the potential at marketing crossover certainly does seem rather obvious.

However, it's a relationship fraught with peril, because cars in video games tend to be treated rather... let's say light-heartedly. No car manufacturer would wish to suggest that their products explode colorfully into slow-motion clouds of flame and shattered glass at the merest brush with an on-road obstacle, for example. Nor would they likely approve the depiction of the vehicle's utility as a weapon against soft targets (such as pedestrians). While these restrictions put a serious damper on most any attempt at cross-marketing, the medium is not without examples of attempts to overcome it.

When I was in college, among the games you could find drifting around the campus Macintosh network was some luxury car manufacturer's attempt to produce an "at-home test drive" for one of its models, resulting in a game that was supposed to simulate the experience of being behind the wheel - by way of a classic Mac's 9-inch, one-color display. While an interesting novelty, it was clunky and boring as a game. Its oversensitive mouse input let the player interact with the game world mainly through drunken swerving. I don't remember if it had any game objectives, other than the challenge of staying in the right lane for more than a second. (I cannot recall the actual car involved, and Google is giving me no love; would love to know what this was.)

Accolade's Test Drive, which simulates a variety of real-life high-priced sports cars, was a rather more successful offering. Intriguingly, the game encourages you to abuse the law, giving you a radar detector and making an explicit goal of driving as fast as you can without getting pulled over. Then again, the suggestion that their cars go very fast and let you avoid police detection with practice might not necessarily be a negative message, for a sports car company!

By my lights, the most successful melding of real-life car brands and playable games has been the Gran Turismo series of console racing games, which stress ultra-realism of automotive physics - with the exception of inertia, which vehicles can discard at will. This allows them to collide at full speed into walls and each another while suffering no damage other than the inconvenience of lost time. Other than that, though, the manufacturers are apparently happy to lend their name to a simulation of driving in circles, well away from traffic and serious consequences.

Have you spotted any other clever (or not-so-clever) insertions of real cars into game worlds?

2 Responses to Driving adver-games, now and then