Versu is an engine for choice-based, conversation-focussed narrative fiction. It is currently available as an iPad app; support for more platforms is planned. Authoring tools are also planned, I believe. What you get right now is a free download with a tutorial, a short adaptation of a scene from Pride and Prejudice, and a longer ("30-45 minute") Gothic-ish story. For $5, you can buy an additional story about a polite family dinner party that turns to... well, I shouldn't spoil it, should I?

Versu is the project that Emily Short and Richard Evans have been working on for the past several years. Their team was acquired by Linden Labs, so this is coming out as a Linden project. (In later discussion, I am told that Linden just released an unrelated interactive-environment-authoring tool called Dio. Thus the perils of companies acquiring smaller companies; integration is a bitch.) 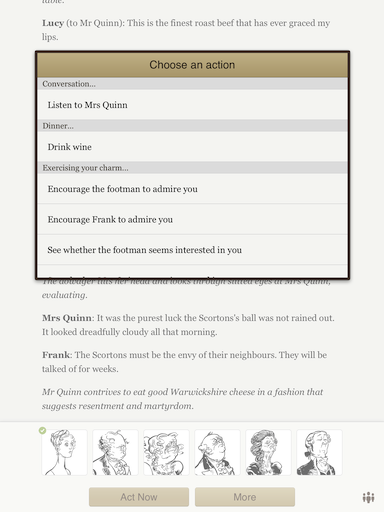 Superficially, Versu runs like any CYOA-format game you might have seen in the past thirty years. But a bit of poking around reveals that there's more going on under the covers. You are rarely offered the simple "left door or right door?" choice that characterizes simple CYOA plots.

Instead, you can take a variety of actions relating to the current state of the world -- the events around you, the recent topics of discussion, the items you have to hand. Each of these actions has a cumulative effect on the world state. Some actions will remain available for many "turns", or throughout the scene; others will be opportunistically available in response to an event. Moreover, an action can affect several story threads at the same time.

Thus, in the drawing room, you can sit and drink tea while talking to the Dowager, or talk to the Dowager while sewing, or sew while making eyes at that handsome Mr Brown. You're always selecting single actions from a menu -- or hitting "more" to let time pass -- but the effect is more nuanced, because the conversation spans many actions, and proportions matter. Of course, context matters too. Scolding Mr Quinn after he has insulted you is quite different from scolding him after a compliment, or out of the blue.

The marketing copy describes this as "social AI". It is certainly AI in the game-industry sense. You can choose to play any character in a story, thus making the other characters NPCs, under program control. They will all chatter on through the scene, reacting to each other and to you -- or acting more vigorously, for scenes outside the decorous bounds of the drawing room. (Presumably the engine could run everybody, creating a completely noninteractive, procedurally-generated drama. But the current app doesn't demonstrate that.)

The down side is that the flow of events can appear, er, rather procedural; a bumpy road of character interruptions and not-quite-sequiturs. At one point I sat and mulishly sewed embroidery at Mr Collins for a good half-hour, in absolute silence -- only to find that he thought me "very slightly unfriendly". Good thing I didn't get out the rusty halberd, then!

This is of course the risk of any kind of videogame social interaction that isn't completely on-the-rails. IF has as much to complain of here as any badly-scripted commercial game. (A typical IF transcript reads tolerably when the protagonist is alone. But we have standards for human interaction that don't apply to somebody rooting around in an abandoned dungeon.)

The best examples in the IF canon are, unsurprisingly, Emily's dialogue-based work. If you're familiar with Galatea or Alabaster, you'll recognize the techniques in Versu: characters follow topics, topics can be recovered (or dropped) after an interruption, and text is adapted and polished to flow smoothly in sequence. However, you will never mistake the result for a hand-crafted cut scene -- any more than you'd mistake a FPS level run-through for a war movie. This is a game, and the prose supports what you can do with it, not vice versa.

What can you do with it? I was rather pleased, in "A Family Supper", to find myself steering the tone of a social gathering with no explicit direction or goals. (Terrifyingly like real life!) Then I hit The Twist, and found that the latter half of the game was strongly goaled -- although with plenty of play in how I dealt with those goals. Presumably I could have ignored them completely, or had an attack of Regency-style vapors. In any case, it demonstrated that the Versu engine was capable of handling both modes.

A story's state is not maintained between run-throughs; if you start over, you reset everybody's opinion of you. Similarly, while three of the stories share a set of characters, there's no state carried over from one to another. So, if there's any sense of progression in Versu, it lies in exploring variations. (The app supports this by awarding achievements for various endings and states.) Is it enough to engage me? Ask me in a week, I guess.

I am not an immediate fan of the Pride and Prejudice era -- that's one problem. The writing here is good (I picked this screenshot for the cheese line) but I mostly go for the wizards and robots and dragons and spaceships. But then, there isn't much fantasy and science fiction which is this well suited to deep social simulation. Maybe I should be thinking about larger timescales, and the interactions of societies? Or society-scale AIs? Iain M. Banks has all sorts of snarky fun with the teatime foibles of Planetary Minds.

I will now spend some time scratching at the interface. Please don't take this as a condemnation of the app; the interface is by and large good. I find it imperfect in several ways, and there's always more meat in discussing near-misses than in designs that are simply bad. So if you're not a designer, you can probably just skip this bit.

New text appears at the bottom, as you'd expect for a scrolling transcript. However, when choices appear, they appear in a box at the top of the screen. (See screenshot.) I found the continual up-and-down focus jumps somewhat jarring. I realize this is a tricky problem! If the choice box appeared at the bottom of the screen, it would block the most recent output; you wouldn't be able to see what you were reacting to. I'd love to make all the choices appear in the footer bar, but in a complex scene there might be a dozen or more available moves. They couldn't possibly all fit. (Again, see the screenshot -- the choice box contains a scrollable list.) So I don't have a solution, but I still want to complain. (Harrumph, says the UI designer.)

The footer buttons are simple: "Act Now" or "More", with the former bringing up the choice box (if available) and the latter allowing other characters to act. Simple is good. On the other hand, I found the "More" button just a little too attractive. Maybe I'm too well IF-trained, but my reflex is to tap "More" until everybody stops talking and it's my turn to act. You can do that in Versu, but it's a very small slice of the possible range! You want to put in your two farthings' worth.

I think, for the footer, I want some visual representation of what options are available. This could be very iconic -- perhaps just a colored bar, with different-colored bands for "Conversation", "Advancing Relationships", "Eating", and so on. (The different categories in the choice box.) Seeing this shift would be a cue for me to jump up and consider new options.

A more concrete complaint: mandatory actions. As I said, you can tap "More" until you reach a point where you're forced to respond. That's fine; it's entirely appropriate in many scenes. However, the choice box is then a modal dialog box. You can't back out of it -- not even to consult the objective list, or return to the main menu. If you quit the app at this point, you may return to find that your position is lost, because there's no access to the bookmark/save option.

This is really not good. There's no game-mechanical reason to use a modal UI here; it's just a choice point like any other. I'm okay with the choice box appearing pro-actively, but it should be as easy as usual to dismiss it. The "More" button should be disabled, is the only difference. (So when you return to the story, you just hit "Act Now" and get on with the mandatory choice.)

Other nitpicks... there's no way to get a transcript of a session. (Except for screen shots.) There's no preference setting for font, font size, or color. (It doesn't have to be fancy, but this is a reading app, and people have different reading preferences. For my iOS IF interpreter, I copied Apple's iBooks style menu -- can't go wrong there.)

The app is built in HTML -- that is, most of the content lives in an iOS WebView. This makes for easy development (and easy transition to a browser version, should the creators want to go that way in the future). But it's also a bit slow and jerkity, even on my iPad 3. I don't really expect them to upgrade the app to all-native code, but I can't help thinking how much cleaner it would feel.

The app also requires Internet access, because the story engine runs on Versu's home server. This isn't a complaint, but you need to keep it in mind for subway and airplane rides. (Or if, indie-game gods forfend, Linden Labs goes out of business and the Versu service dies.)

Finally, I have to wag a finger at the weak Voiceover support. It's not nonexistent; the UI is HTML, and HTML is voice-accessible by default. You can get Voiceover to read any bit of text on the screen. But new text is not read out when it appears. (If you keep tapping "More", Voiceover just says "More. More. More." You have to poke around to get the story text.) Also, when the choice list gets long, it's difficult to scroll the choice box to reach the later options.

It may be difficult to fix this. I have implemented Voiceover support for iOS native apps, but never for a WebView-based app -- I don't know what's involved. However, for a text-based story medium on a voice-accessible platform, it really is a shame to miss out support.

So. You know it's a Zarf review when you get down through pages of review and realize I forgot to say whether I liked it. I like it! Versu is distinctly different from any of the choice-based formats I've seen before. It leaves my old complaint -- "CYOA invites lawn-mowering" -- dead and buried in a pauper's grave; I shall not resurrect it. It manages to recreate the drama-management of Facade without invoking the keyboard-phobia of the open prompt. Future experiments in narrative interactivity may not use this style of character-based AI, but I am confident that this style of open, explorable choice will continue on.

One Response to The longer than I expected Versu post